Ancient DNA analysis is a rapidly growing field that can provide insight into the movements and relationships of both past groups and individuals. In partnership with the Max Planck Institute for the Science of Human History, a remarkably large sample of individuals from Tell Atchana have been analyzed for ancient DNA, making up one of the largest DNA datasets from the ancient Near East. The results have shown that the local genetic pool at Alalakh was remarkably homogenous and stable throughout the city’s history and that this gene pool extended into the neighboring region of Tell Mardikh (Ebla). The ancestry of this region during the Bronze Age appears to be a mixture of the earlier Amuq Valley population with ones from other, perhaps multiple, areas, including possibly northern Mesopotamia. 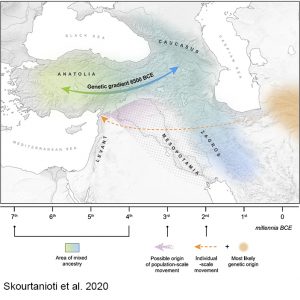 Despite the homogenous nature of the local gene pool, one extreme genetic outlier was identified among the sampled individuals. This adult woman was discovered thrown face down into a well, likely after having been murdered, and her ancestry can be traced back to groups in Central Asia. While no other individuals have thus far been identified at Alalakh who share her genetic background, complementary isotopic analysis indicates that she was likely born and grew up at Alalakh, implying that she was not the only person in the city with this far-away ancestry.